Another Finished Object, and yes, it’s socks again. You will soon learn that I make more socks than anything else. They’re small, portable projects that fit in my handbag, and have short rounds so I can stop at any time without being in the middle of a row. And they’re addictive. And I have to do something to use up the copious amounts of sock yarn that I seem to ‘accidentally’ buy at yarn festivals… Plus, Raynauds Syndrome and permanently cold feet, so lots of wool socks are useful.

Anyway, on to these particular ones… 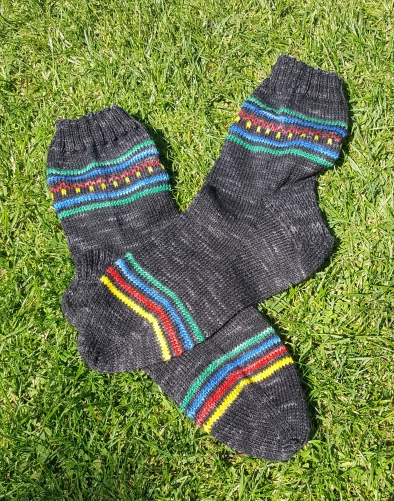 These were a test knit for the talented and lovely Zoe from the Pins And Needles podcast on YouTube and also on Instagram – they’re her first design to be published (in a few weeks once a few more test knitters have finished), and I *think* I was the first to finish them, which is making me feel a little smug! They were done in exactly two weeks, which is unheard of by me. The fastest pair of socks I’ve managed up till now is about 3.5 weeks, so I’m pretty chuffed. Amazing what happens when you knit monogamously on one project… It’s mostly vanilla sock with some striping and a bit of fair isle style colourwork for the beach huts up at the top. I’m not going to tell you any more than that, because it’s going to be a paid-for pattern on Ravelry, and I don’t want to take income away from anyone, and especially not a friend!

I made the largest size (72 stitch sock) on 2.75mm needles. Despite having quite skinny feet (or so I thought), standard 64 stitch socks seem to be too tight around my heel. That might be my choice of heel design (obviously in these socks I followed Zoe’s directions though), so I maybe need to try some others and see if I do better. I also learnt how to do jogless stripes using this YouTube tutorial, which is a new technique for me, but I’ll definitely be doing it again in future.

They were knit in yarn from Travel Knitter and Owl About Yarn – the main colour is BFL Supersock (75% Superwash British Bluefaced Leicester and 25% nylon) by Travel Knitter in the Laneway City colourway, and the contrasts are Sparkle Owl (75% merino, 20% nylon and 5% stellina) minis by Owl About Yarn (these aren’t currently in her Etsy shop, but keep your eyes peeled, she’s always updating it).  The Travelknitter yarn is surprisingly soft for a BFL blend, which is sometimes a bit rough until it’s been washed a couple of times, but this is lovely. I didn’t use the whole skein (100g/425m per skein); I haven’t weighed the leftovers, but I reckon I only used two thirds to three quarters of the skein. The Owl About Yarn is gorgeous, because, well duh, it’s merino! I love merino, I’d knit with nothing else if my budget could stretch to it. Plus, sparkles! The minis were a full rainbow of seven colours, so as well as having some of each left, I also still have 3 colours that I didn’t use at all (10g/40m per colour), so I will have to figure out what I’m going to do with the leftovers.

All in all, 10/10, would sock again – and make sure you buy the pattern and make them once Zoe releases it! I will add a link when they are available and/or repost about them again.

View all posts by knittingmusician

I’m a Fuck This Knit patron, and you should be too!