Well this is exciting. Or terrifying. I’m not sure which. Maybe both. Anyway…

I’ve had an inclination to do some sort of blog/podcast/something for a little while now to talk about the two great loves in my life – cats and food. Oh no, that’s not right (well, maybe it sort of is…)… Music and crafting. Yes, that’s better. Podcasting seemed a bit too scary, so I’m starting here with a blog instead, and we’ll see how that goes.

There’s a bit about who I am on the About Me page, and you’ll get to know me better as I post more. I’m going to try and post at least once a fortnight with news about what music I’ve done/have planned, progress of my craft projects, and maybe even some finished things. Projects do occasionally get finished, although the pile of WIPs (that’s Works In Progress, for muggles out there) is ever increasing. I’m currently trying to finish two projects for every one that I start, but it doesn’t always work. Apart from anything else, I can always find an excuse for starting something new *right now* (“Friend A has just announced they’re pregnant, so *of course* I’ve got to start a gift for the baby… What do you mean it’s not due for another six months?”), and given that I’m having a bash at Tour De Sock (I’ll do another post nearer the time about what that is) this year, that rule is going to go right out of the window in July & August. Ho hum. The only person who cares is me. And probably my fiance, who has to put up with the ever increasing pile of project bags that I’m not very successfully hiding down the side of the sofa.

There’s always at least one pair of socks on the go (well, you’ve got to have a small travel project that fits in your handbag, right?), and usually at least one bigger and/or more complicated project too. I’m not going to talk about my current WIPs just now; I’m saving that for another post – not that I’m trying to make it look like I’ve got lots to say or anything. Although my nearest and dearest will gladly tell you I can talk for Britain…

Music wise, the bulk of what I do now is choral singing with the Clerkes of All Saints, which is a travelling church choir based in York. We exist to take church music to churches in North & East Yorkshire that wouldn’t otherwise have it, and we sing at weddings, and the occasional concert. We’re really quite good, not to put too fine a point on it, but the main thing for me is the social side – all singing should be followed by a trip to the pub, in our opinion. The singers in there are some of the loveliest people I’ve met, and we do have a good giggle. I’ll be posting up where we’re singing so you can come and hear us, if you’re into that sort of thing.

I also do a bit of music teaching alongside my day job. At the moment I just have a small number of students on piano and singing, and I’m trying to keep it at a nice low number – while the extra cash is nice, I prefer to collapse on the sofa and have free (knitting) time in the evenings, rather than having to carry on working when I get home. The teenagers I teach are all lovely; they’ve all been with me for about five years now, so we know each other pretty well, and the vast majority of the time it’s great. Two of them are working for exams in the next few weeks, which is both exciting and scary for me as well as them! 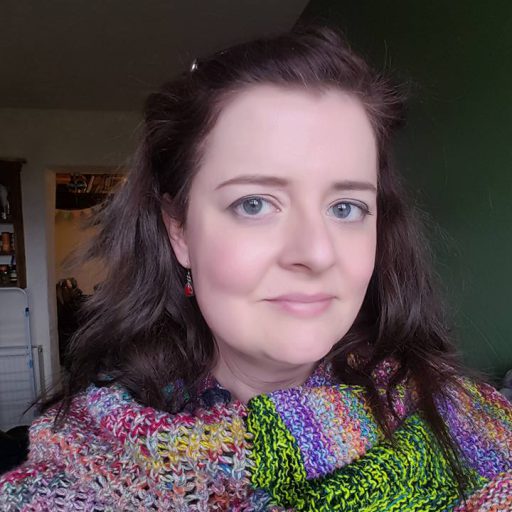 I know, scary, right? The knitted thing around my shoulders is my Marled Magic Shawl by Stephen West, which I did as an MKAL with my two best friends earlier this year, and is enormous. I’ll do a separate post about it at some point with more details, but basically it used about 800g of sockweight yarn held double, and is knit in sections (but with no sewing – hurray!). Mine is a ginormous clown barf meets unicorn riot of colour, and I love it. It’s over 6 feet across, and is super warm.

I think that will do for the time being. I’ll aim to do another post later in the week about what I’ve got going on at the moment.

View all posts by knittingmusician

I’m a Fuck This Knit patron, and you should be too!